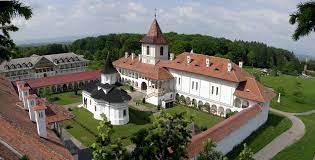 THE HISTORY OF THE BRÂNCOVENI BOYARS FROM SOUTH SATURDAY
The Romanian people, who were born Christians, have through this monastery, as well as through the other 500 Orthodox monasteries and hermitages in Romania, the strongest bridge of the Romanians, on both sides of the Carpathians.

At the end of the 17th century, Transylvania had barely escaped the attempts of the Calvinist princes to calvinize it. However, the attacks continued on the main point of resistance, the Orthodox faith of the Romanians, in fact aiming at their denationalization. In order to strengthen and save the Romanian Orthodoxy from the new danger of Catholicization, which appeared through the passage of Transylvania under the rule of the Habsburgs (1683), the ruler Constantin Brâncoveanu founded an Orthodox monastery on High Saturday, to testify in time about the unity of the nation and faith of the Romanians on both sides of the Carpathians.

An important role until the destruction of the monastery in 1785 was played by the abbots (abbots) Ioan (originally from Pojorta) and Visarion the hieromonk, who after the demolition retired to the village of Sâmbăta de Sus, making a special contribution to the building of the village church.

The religious persecutions of the Austro-Hungarian rule claimed thousands of Romanians. The change of the ancestral faith of the Romanians would have easily led to the loss of their national identity. The Orthodox Romanians tried to resist, being helped primarily by their churches and monasteries. This is why the ordeal of the destruction of the monasteries and churches in Transylvania began. More than 250 monasteries were destroyed by cannons and the army of Viennese General Bukow sent by the Vienna Court to annihilate Orthodox resistance. For a long time, the Austro-Hungarian administration did not touch the Brâncoveanu Monastery, the foundation of the ruler Constantin Brâncoveanu, due to the relations that the ruler had at the Court of Vienna. After the beheading of the ruler Constantin Brâncoveanu by the Turks, in 1714, the Court of Vienna took into account first the heiress of the domain, Mrs. Marica, his wife, and then the fact that a nephew of the ruler was still alive.

In 1785, taking advantage of the fact that after 1772, the Sâmbăta de Sus estate had temporarily left the Brâncoveanu family (until 1802) due to non-payment of a debt, which led to the pledge of the estate to the merchant Dumitru Marcu, the court in Vienna, at at the request of the Catholic administration, he sent General Preiss, who demolished the Brâncoveni monastery. The cells were completely destroyed and the church brought to ruin.

Brâncoveanu Monastery, the last great bastion of the defense of Orthodoxy in Făgăraş County, built between 1696 – 1698, was destroyed in 1785. After the demolition of the monastery, the Brâncoveanu palace from Sâmbăta de Sus, located 10 km away from the monastery, was of descendants of the Brâncoveanu family. They ruled the domain until the agrarian reform in 1922, when the Ministry of Domains handed over to the Metropolitan of Sibiu the Brancoveanu domain together with the ruins and the whole monastery precinct from Sâmbăta de Sus.

During the more than 140 years of abandonment in ruins since the date of destruction, several attempts to restore the monastery are known, all left without any result due to the power of the time which was contrary to Orthodoxy and Romanianism in Transylvania.

The honor of becoming the second founder of the Brâncoveanu Monasteries from Sâmbăta de Sus went to Metropolitan Dr. Nicolae Bălan, who began the restoration of the church in 1926. The works were carried out under the supervision of the Historical Monuments Commission, being led by architects Georges Cristinel, Petre Dumitrescu and Friedrich Buertnes, who sought to restore the original shape of the monument. The consecration was made in 1946, after the war. Metropolitan Nicolae Bălan kept the old painting inside the church.

The architecture of the monastery church fits completely in the Brancoveanu style, a style that appeared at the end of the century. XVII and the beginning of the century. XVIII in Wallachia. On the outside, the stone decoration of the door and window frames, but especially of the sculpted pilasters and the perforated stone panels in the church porch give a special beauty to this monument of Christian art. The toothed brick belt, the shingle roof and the perfect proportions show us a monument worthy of the time of the ruler Constantin Brâncoveanu. The church tower is octagonal on the outside and cylindrical on the inside. The interior of the church, in the shape of a cross, is divided into an altar, nave, narthex and porch, as found in most churches built during the reign. The painting in the porch of the church is new and includes scenes from the Old Testament and the New Testament: The Last Judgment, Heaven and Hell, etc. The entrance from the porch to the narthex is made through an oak door, fixed in a carved stone frame, and above the door is the inscription dug in a stone slab, with the following content:

In the nave, the painting is arranged in five registers: the holy martyrs, scenes from the New Testament, the prophets, the Transfiguration and the Resurrection of the Lord. The temple of the church, built of solid wall, which allows the entrance to the altar through three doors, is also painted entirely in fresco technique, with icons corresponding to the church canon. The fresco painting of the altar is arranged on four registers: the Mother of God on the throne above the dome of the altar, the Communion of the Apostles, the Holy Hierarchs (in two registers).

Below the church at about 50 m, Metropolitan Nicolae Bălan also rebuilt the old bell tower of the monastery in its original form, where until 1997 were the 5 bells, when they were moved to the tower of the new church. Their weight exceeds 2000 kg.

In the years 1976 – 1977 the area owned by the monastery was fenced and a new oak carved gate was placed and the restoration work of the Brancoveanu chapel was completed, executed in oak carved with Brancoveanu motifs, and inside decorated with non-Byzantine paintings. .

Inside the monastery courtyard is the fountain “Izvorul Tămăduirii”, documented from the century. the 16th century, being the oldest piece inside the monastery, around which, over time, many miraculous events and legends took place and were woven. It was restored by Metropolitan Nicolae Bălan, and nowadays, during the time of the abbot, Archimandrite Veniamin Tohăneanu, a canopy carved in oak wood and a wall were built around it, on which are painted some biblical scenes.

Also like a renovation work of the Brâncoveanu Monastery is the renovation and extension of the altar in the forest, where holy services are performed outdoors, in the middle of nature where you can hear the accompaniment of birds with the voices of priests and singers from the pew.

The third founder of the Brâncoveanu Monastery from Sâmbăta de Sus is Metropolitan Dr. Antonie Plămădeală, Archbishop of Sibiu and Metropolitan of Transylvania, Crişana and Maramureş, between 1982 -2005 who resided from the foundation of the Brâncoveanu Monastery in 1985. coordination of the architect Nicolae Diaconu, aiming to preserve the Brancoveanu style. Under his direct guidance, with the relentless support of Father Abbot Arhim. Veniamin Tohăneanu, of the father economist Protos. Ilarion Urs, together with the whole community of the monastery. Under his guidance, the painting in the old church was restored. The surrounding area was built from the ground up in a quadrangle-style enclosure, in the shape of a quadrangle, according to the Romanian Orthodox tradition, composed of two massive buildings of two-level buildings – one to the north and one to the south, with three gazebos carved in stone by architect Doru Cordos (two inside the enclosure and one outside, which form a common body with the two buildings). The building on the north side includes, among others: A large chapel, the abbey, the bell tower and the cells of the living. The building from the south: a spacious refectory with all the outbuildings, the cells of the living, a large library containing over 65,000 volumes of books (of which 40,000 donated by Metropolitan Antonie Plămădeală) and 10,000 periodicals, the Brancoveanu house, the cells, and the attic are arranged two museum halls where glass and wood icons belonging to the XVIII – XIX centuries are exhibited, mostly executed in a naive manner, in which the Brâncovenesc style predominates, works of great historical value., vestments and liturgical objects, manuscripts, letters and other objects of religious art, collected by Metropolitan Antonie Plămădeală, all this confessing the intention to make the Brâncoveanu Monastery a center of Orthodox spirituality and Romanian culture. This was done because outside the central precinct a building was erected that houses the “Saturday Academy”, a center of Christian spirituality, art, science and culture, which in addition to a modern conference, congress and symposium, also includes bedrooms.

Under the pastorate of His Eminence the Metropolitan, Dr. Laurenţiu Streza (2005-) continued the completion of a modern canteen, with over 500 seats, equipped with the most modern equipment and installations.

Before the demolition of the monastery there were two schools: one for grammar and another for painting on glass, a technique (craft) very widespread in Transylvania at that time.

The Brâncoveanu Monastery also has an important role in terms of spiritual life. The holy services performed according to all the monastic order; the religious assistance provided by the priests and the inhabitants of the monastery; sermons, speeches, spiritual conferences of Father Archim. Teofil Părăian, held in the country and abroad, made the Brâncoveanu Monastery a true center of spirituality and culture known throughout the Christian world.